Cannabinoids: Messengers from the plant.

“In humans, CBD exhibits no effects indicative of any abuse or dependence potential.” (14).

Clinical, double blind, placebo-controlled trials (the gold standard of medicine) have shown evidence that cannabinoids could be an effective treatment for severe forms of epilepsy. (14) (16) (17) (18)

It is important to state that while the initial scientific evidence from pre-clinical trials is positive, the evidence is, as of now, still inconclusive. It is vital that cannabis research is supported to sort fact from fiction and figure out the true potential of cannabinoids.

The Endocannabinoid System (eCS) is a complex signaling system composed of cell receptors found on all major bodily organs, chemical compounds (endocannabinoids) that communicate instructions to these receptors and fatty acids (enzymes) that break down the messengers. The primary endocannabinoids are Anandamide and 2-Ag. (26) The most common phyto-cannabinoids are THC and CBD.

The interaction between cell receptors and compounds is simple: a cell receptor is a protein bound in the membrane of a cell, like a gateway. Particular chemical compounds (ligands) then bind to these receptors to cause an action in the cell, like a messenger with a key to open to the gate.

There are two cell primary cannabinoid receptors in the body:

(It is likely there are more cannabinoid receptors than the two currently known. TRPV1 and GPR55 are prime candidates. (27))

It is suggested in the current scientific literature that the endocannabinoid system performs a regulatory function in the body, helping to maintain physiological and emotional homeostasis, ensuring that bodily functions do not operate deficiently or excessively. (32) (33) (34) (35)

There is an emerging concept of “eCS deficiency syndrome” which suggests that a malfunctioning eCS might be related to ailments such as migraines, fibromyalgia, irritable bowel syndrome and other conditions. (36) (37) (38)

It is important to remember that our understanding of the eCS is in its early stages. Further investigations, experiments and trials will reveal more about the basic biology of the endocannabinoid system and its functions. 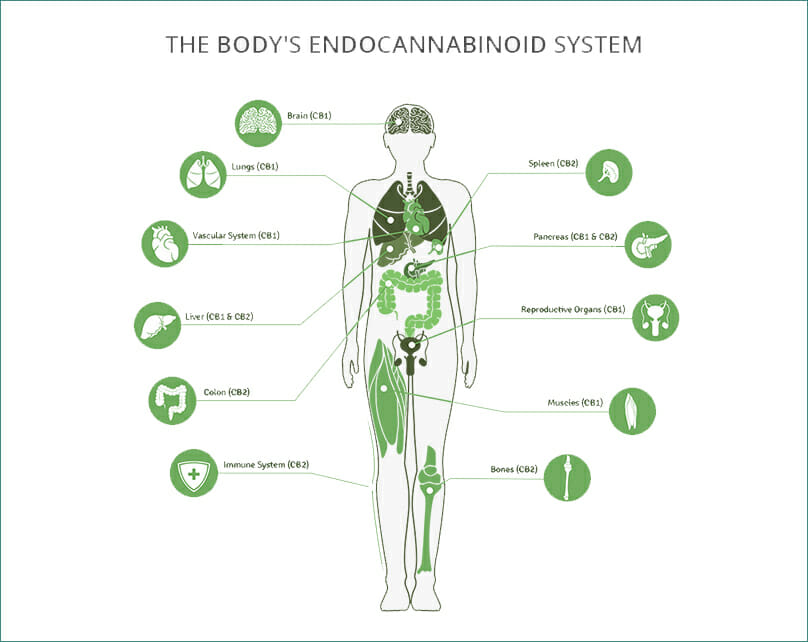 Terpenes are defined as aromatic organic hydrocarbons. They are naturally forming chemical compounds found in the essential oils of most plants. Strongly associated with aromas, terpenes are found in rosemary and lavender (39). In the context of cannabis, terpenes provide each strain with its signature taste and smell. Terpenoids are terpene compounds which have undergone some chemical reaction, such as oxidation. There are over 200 different terpenes or terpenoids expressed in the cannabis plant. (40)

Ecologically, terpenes help to repel insects and herbivores from the plant, while also causing the stickiness which can trap insects. Terpenes also have a physiological effect on the human body, interacting with cells, neurons and enzymes. The terpenes operate synergistically with cannabinoids to amplify the effects of both compounds. (40)

Ethan B. Russo, a prominent cannabis researcher, has suggested a hypothesis, backed by preclinical scientific evidence, that terpenoids interact synergistically with cannabinoids such as THC and CBD to modulate their effects. This has been dubbed “the entourage effect”.

He claims that, due to their myriad effects on the human body, further research into terpenes, cannabinoids and their synergistic interaction may reveal a “pharmacological treasure trove”, that could lead to novel approaches to treatment-resistant depression, anxiety, drug dependency, dementia and a panoply of dermatological disorders (40)

Research suggests cannabis terpenes could play a role in providing medical and therapeutic benefit to humans.

For example, in an experiment with mice, limonene was shown to have powerful anti-anxiety effects, and in a human experiment, where hospitalized depressed patients were exposed to citrus fragrance in ambient air, 9 out of 12 discontinued their antidepressant medication. (41)

Myrcene was shown to have strong sedative and muscle relaxant properties in mice. (42)

Caryophyllene has been shown in a preclinical trial to ameliorate the damage done in kidney cancer treatment and the researchers suggest it has the potential to treat diseases related to inflammation. (43) Caryophyllene interacts with the CB2 receptor, and it has been suggested it could serve as a treatment for chronic pain. (44)

It is very early days in terpene research and more studies must be done, but initial experiments suggest therapeutic potential.

Extraction Methods: From Plant To Person

CBD is found in nearly all cultivars of cannabis, including CBD-rich strains, THC-rich strains and industrial hemp varieties. The cannabinoid is found in highest concentrations in the flowers of the plant, but also in the leaves and stalks. To make the compound available for safe human consumption, CBD must be extracted from the plant material. There are several methods to extract nutrients and chemical compounds from hemp, listed below.

Process:
Hemp seed is grinded into a hemp cake, then pressed at cold temperatures to produce oil. The oil is filtered to remove any suspended solids. (45)

Process:
The plant material is first decarboxylated (heated up to make the phytochemicals more bioavailable). Plant material is then added to olive oil and heated for a longer period. The resulting oil is separated from the organic matter and is ready for consumption. (46)

Process:
Extraction liquid (usually ethanol) is added to the plant material, which strips away the cannabinoids, terpenes and chlorophyll. The liquid is then evaporated to leave a phytochemical rich oil.

Process:
Carbon Dioxide (CO2) is compressed to very high pressure (10,000 psi) and becomes extremely cold. The CO2 becomes supercritical, meaning it possesses the properties of both a gas and a liquid. The CO2 is passed through the plant material, removing trichomes and terpenes. Solution is then separated into its constituent parts, where the CBD-rich trichomes and the terpenes are collected while the CO2 is condensed to a liquid and stored, where it can then be reused in another cycle. (46)

Process:
Very similar to the above, however the CO2 is not in its supercritical form. It will do even less damage to the plant material; however, the yield is somewhat lower. Many companies combine both methods.

Delivery Methods: From Bottle To Body

Various methods are available to deliver CBD into the body. The choice of method depends on the needs of the individual. An important pharmacological concept here is bioavailability, which refers to the fraction of an administered dose of unchanged drug that reaches the blood stream. Bioavailability can depend on the quality of the product, it’s ingredients, and the delivery method employed. In most circumstances, optimum bioavailability is the desired outcome. Occasionally, practical factors such as ease of delivery or targeted area (like the skin) can influence the choice of method.

This method involves placing drops of cannabinoid-rich oil/tinctures under the tongue, where they are effectively absorbed through sublingual blood vessels and micro-capillaries.

CBD can be ingested by placing an oil in a food or drink or using capsules. This method sends the CBD through the digestive tract before moving through the hepatic portal. It is then metabolized by liver enzymes before it enters the bloodstream.

CBD can be suspended in an e-liquid solution of Propylene Glycol (PG)/Vegetable Glycol (VG). The e-liquid is vaporised and inhaled directly into the lungs and then absorbed in the bloodstream, bypassing any digestive functions.

This method involves application directly onto the skin of balms or creams infused with CBD. There are endocannabinoid receptors on the skin which with cannabinoids interact. (57)

This website uses cookies to improve your experience while you navigate through the website. Out of these cookies, the cookies that are categorized as necessary are stored on your browser as they are essential for the working of basic functionalities of the website. We also use third-party cookies that help us analyze and understand how you use this website. These cookies will be stored in your browser only with your consent. You also have the option to opt-out of these cookies. But opting out of some of these cookies may have an effect on your browsing experience.
Necessary Always Enabled
Necessary cookies are absolutely essential for the website to function properly. This category only includes cookies that ensures basic functionalities and security features of the website. These cookies do not store any personal information.
Non-necessary
Any cookies that may not be particularly necessary for the website to function and is used specifically to collect user personal data via analytics, ads, other embedded contents are termed as non-necessary cookies. It is mandatory to procure user consent prior to running these cookies on your website.
SAVE & ACCEPT

Our newsletters are written and edited with love and care. We keep the number of ads per issue to a minimum.